David first started his formal training in 1982 and since then has worked for some of the top companies in the world.

In 2001 he was honoured by the Institute of Musical Instrument Technology for his contribution to the industry who elected him a Fellow.

In 2013 he was invited to be a member of the Chinese Piano Tuners Association, making him the first ever foreigner to join.

In 2014 he was appointed Professor of Piano Technology at the Changshu Institute of Technology, in Shanghai .

He has trained at Louis Renner and has unrivalled knowledge in the UK and China, in piano construction, action design and construction.

He currently serves on the Council of the Institute of Musical Instrument Technology and has additional roles with the education committee.

He is also a member of Euro Piano, the International Association of Piano Builders and Technicians and a technical member of the Pianoforte Tuners Association.

Sarah is our on the road tuner. She completed her training with one of the leading piano companies in the UK before joining Invicta Pianos.

She is a student member of the I.M.I.T. 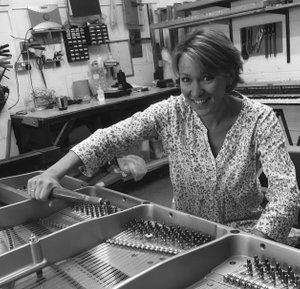